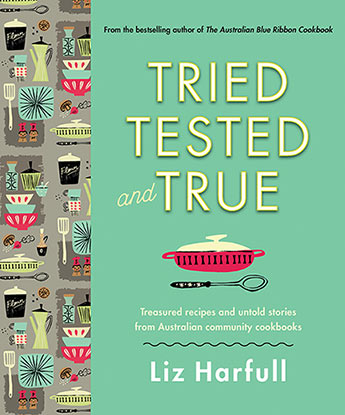 Ann Creber passed me this book on Australian community recipes because as well as being part of the same community we have a shared interest in all things food.

This is not a book full of recipes. But, it does have recipes to take you down memory lane.

Initially I started picking through the book hunting for recipes that I might enjoy using, it seemed there weren’t that many recipes. As I reassessed the book I went back to the table of contents – no real help there either. It wasn’t until I read the Introduction that I discovered the book is a trip down memory lane looking at Australian cook books put together by communities to raise money for various causes from supporting the war effort and underprivileged, books by country women, recipes by famous people – all with a focus on fundraising and wonderful stories.

I just had to do some cooking so first stop for me was the index. Once I earmarked some recipes I relaxed and started reading the book.

The book is liberally sprinkled with little gems – I started with a recipe for Worcestershire sauce – one of the best recipes I’ve seen. And on the very next page a description of how in the 1970’s the concept of eating in front of the TV was new. Among others, the “Grub Stakes”, a Melbourne cookbook, included a TV meal for fried chicken giblets casseroled with mushrooms and beansprouts to eat while watching Hey Hey It’s Saturday!

Apart from the horror stories there are beautiful photographs of the people, food and times accompanying the recipes and lovely stories of ordinary and extraordinary Australians who contributed to the books. The sort of stories that you want to share and hope never get lost but handed down to your kids.

The recipes copied into this book have been translated for modern cooking. At first I found this a bit annoying because I have lots of recipes from my grandmother, mother and aunts mostly handwritten and I treasure the old fashioned measurements. But then as I went to try some recipes I really appreciated the accurate measures used in the book. These days I refuse to consider any recipe book or shared recipe that is ambiguous on weights and liquid measures – it’s much easier working with a set of scales.

Postscript: Ann used to be a food stylist, has written a number of recipe books and was a food reviewer for the Age newspaper. Today she regularly reviews books and has a radio program called the Good Life. I grew up in a family that owned foodie businesses, and in the wind down to my retirement owned a restaurant, a gourmet and kitchenware retail business and I did training as a commercial chef. I help Ann with a lot of the tech stuff, everything except FB which she loves and is addicted to, I’m not. And, if I’d read the cover sub-heading I would have immediately realized the value of Liz’s book: “Treasured recipes and untold stories from Australian community cookbooks”.