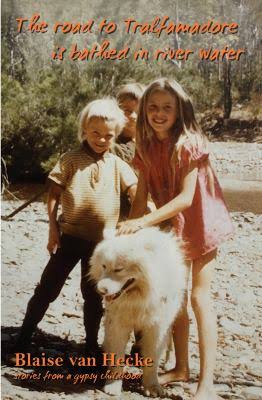 I was really looking forward to speaking with author Blaise van Hecke….I had so much pleasure from sharing the childhood experiences of her memoir titled THE ROAD TO TRALFAMADORE IS BATHED IN RIVER WATER. I was especially pleased when she offered to visit the studio for a chat!

This is a charming little book, with each brief chapter sharing a memory from Blaise’s colourful and mobile childhood, spent in Australian suburbs, the countryside and overseas. It is told in the voice of a child, but with the warmth, wisdom and nostalgia of the adult she is now.

One of a family of four children – an older half sister and two younger brothers – she has fond memories of their days spent in bathing in the river, fishing, climbing, and being mainly home schooled.

Her mother was always mobile, both in her travels and her choice of partners, so there were several “daddies” along the way, with Blaise’s relationship with some better than others.

Her stories of communal living, collectives, shared building of mud brick homes reminded me of the days here where these communities were established in places such as Bend of Islands and Eltham, so I wasn’t too surprised when Blaise told us that she now lives in Eltham herself. As a young child her family also spent time on Cockatoo, so we could almost claim her as a “local”!

I know the old adage about “judging books by their covers” but this cover is irresistible. It depicts three happy kids, a giant husky dog and a bush background. Blaise told us that the book’s sub-title ‘Stories from a gypsy childhood’ brought some disapproval because of the now-negative connotations of the word ‘gypsy’, but I agree that is expresses perfectly the sense of roaming people.

Blaise loves rivers and describes in detail the affinity she feels for them, painting a vivid word picture of hours spent beside them and in their waters.

It was a new and not altogether happy life for Blaise when she left home to spend her secondary schooling years as a boarder at the exclusive girls’
girls’ school Methodist Ladies’ College!

Blaise is a publisher herself now and the book is a publication by Busybird Publishing. This group also offers workshops for aspiring authors and their own successful track record should give any young writer confidence! (One of their books was a favourite of mine last year… Just Another Week in
Suburbia.)

It was a delight to have Blaise with us and I look forward to her next two books, in which she will recount her experiences in the life-changing pilgrimage so many make now on the Camino Trail.

The book is dedicated to her nomadic and romantic mother, whom she obviously adores and to whom she gives the credit for her own ability as a story teller.