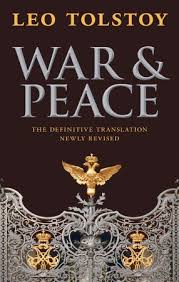 Do you ever feel a pang of guilt when you see a reference to War & Peace and realise you have still to read it? I do…. but then I am seduced by the arrival of a new Harry Bosch crime novel tempting me and I succumb!

Good Life guest, Ander Louis, was in the same situation but at the end of last year he made the resolution to read one chapter each day during 2018…
fortuitously, there are 365 chapters in the book! He has maintained the resolution and, not only has he read over 270 chapters, but has also recorded them on podcasts, which are available to others who have not had the self discipline to read the book themselves!

It was great to see Ander in the studio again… he was with us last year speaking about writing workshops he conducts for young people, and about the books he himself writes. (And despite the time and energy this involves, he is also an Uber driver!)

He admitted that at the end of a long day he sometimes finds it difficult to muster the energy and will to read his arbitrary chapter, but has never failed! He is grateful that most of the chapters are comparatively short and he can usually manage the task in 10-15 minutes, but often drops off to sleep on the sofa as soon as he has finished.

He has a very pleasant voice and I am sure it would be a very enjoyable session for any listener sharing his readings! I would love to hear from anyone who has participated…..

I look forward to Ander’s next studio visit, hopefully after he has completed the book he is currently writing when he finds a little time in his incredibly crowded days.