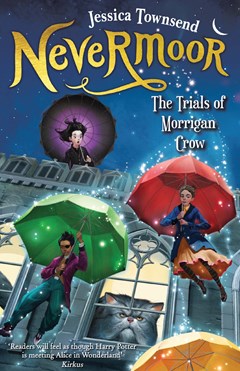 The first guest I spoke with this week on my 3MDR radio program “the Good Life” has written a very ambitious book for a first novel…over 400 pages of fantasy, written for pre-and young teens. Titled NEVERMOOR, we are introduced to the accursed girl named Morrigan Crow in her 11th year. The daughter of the self-important Chancellor of Great Wolfacre and step-daughter of the gorgeous, much younger Ivy, Morrigan is blamed for every misfortune that happens within their community. This is because she happens to have been born on a day which is believed to give birth to those cursed children who create disasters wherever they live.

Because of this, Morrigan is blamed for storms that ruin local crops, the broken hip of a 90-year old woman who decides to go ice skating at the age of 90!) and a whole series of other local misfortunes.

Local schools refuse to take the risk of accepting her as a pupil, so her father has to reluctantly pay for expensive private tuition. However, he comforts himself with the thought that Morrigan will die the day she turns 12, thus saving him further expense. By a cruel coincidence, stepmother Ivy chooses the day before the 12th birthday to announce that she is expecting the birth 0f a son….to the delight of the Chancellor!

Morrigan is resigned to her fate .. BUT, totally expectedly, Justus North arrives amidst storms and hounds and chaos! An odd looking man with wild red hair and beard, he has come to take Morrigan to the mystical land of Evermoor, to begin a new life. However, to be accepted there, Morrigan has to undergo four trials to prove her worth!

Now, at this stage, author Jessica Townsend was reluctant to share too many more details and risk spoiling the excitement of this story! We spoke about her early years of writing and she told us that this book, the first of a trilogy, had taken her 10 years to create. I thought perhaps she has turned to writing fantasy as an only child, but she assured us she was the youngest of five children… so perhaps this was her escape!

Now regular listeners to The Good Life will know that I am not usually a reader of fantasy, but I did find this book quite absorbing and I can imagine that it would certainly appeal to the age group for which it is written. It would be an excellent addition to the Christmas stocking of a pre-teener who loves a bit of fantasy!

Jessica is well on the way with her second book in the series, so readers who enjoy this current book can look forward to her next offering in 2018.